You Are Here: Reseach topics 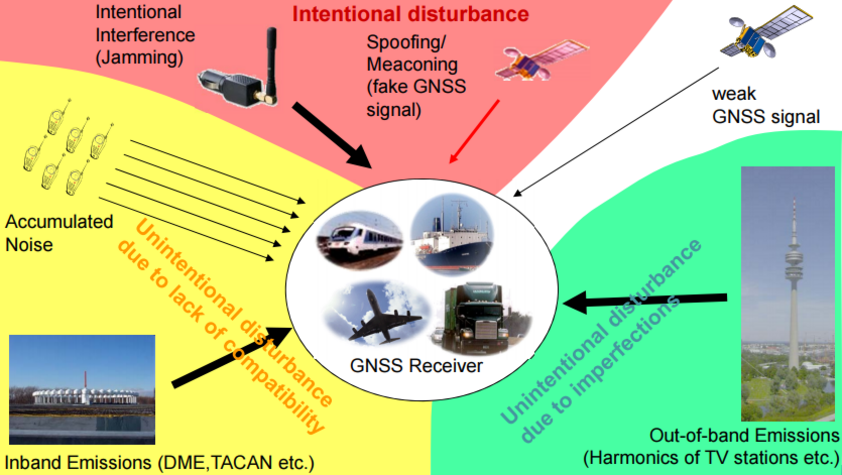 GNSS signals are well below the noise floor. Therefore GNSS receivers are very sensitive to RFIs. On the one hand, there are unintentional interferences due to imperferctions of systems, that use a nearby frequency spectrum, or due to lack of compatibility of systems, that use the same frequency band. On the other hand, there are intentional interferences like jammers to prevent GNSS navigation and / or localisation. In an interference scenario the signal to noise ratio is severly decreased, which in the worst case results to a failure of the GNSS navigation. Todays conventional algorithms to suppress interferences are based on antenna arrays, that use half a wavelength or less antenna spacing. A new research topic of the Chair of Navigation is the analysis of a larger antenna spacing.

Spoof signals have an even worse impact on the position estimation than interference signals. In contrast to interferences a spoofer does not result into a failure of the GNSS navigation but to a wrong position estimation. Whereas a failure can be detected immidiately, a wrong position is only obvious some time later. Due to the increasing number of safety critical applications like autonomous cars, assisted landing maneuver of airplanes, assisted maritime traffic, etc. spoofer detection gains signaficant attention. Spoof signals are GNSS like signals, that are shifted in time. There are some examples listed in the picture above. Because of the enormous amount of different spoofer types is the research topic still not fully covered.

Antenna calibration is a mandatory requirement to determine the attitude of a multi-antenna receiver. Moreover, knowing the antenna attitude can vastly improve detection and mitigation of spoofers and / or Radio Frequency Interferences. In todays receivers the time-varying phase offset introduced by the active elements like amplifiers, downconverters as well as various filters and unequal cable lengths are usually calibrated using a pilot signal, which is injected in the antenna signal. This method, however, does not only complicate the manufacturing process, but also increases the complexity of the receiver architecture and power consumptions. New approaches developed recently use GNSS live signals for calibration. These methods are established based on the fact that for each incoming GNSS signal the direction of arrival [abbr.: DOA], is exactly known by means of the ephemeris data, which is transmitted from each satellite. In order to estimate the calibration phases, the DOAs of the received satellite signals are compared with their corresponding expected DOAs, which are determined based on the ephemeris data. The problem, however, lies in the fact, that the expected DOAs are given in the East-North-Up coordinate frame, whereas the measured DOAs are given in the local coordinate frame and are additionally affected by the unknown phase offsets to be calibrated. The Chair of Navigation has developed an algorithm, that estimates the calibration phases and the attitude of the antenna jointly.